RACE & THE MAKING OF “COMMON SENSE” 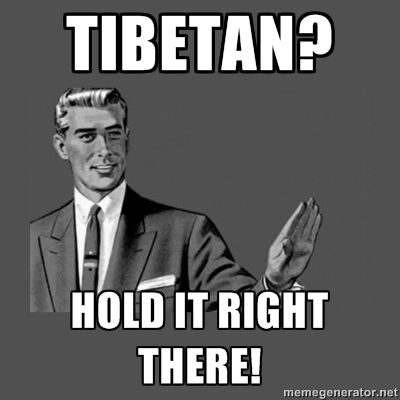 ICT recently posted “Tibetans in the Chinese Communist Leadership” by Bhuchung K. Tsering on their blog. I became especially interested in this part of the blog-post:

It was interesting to see that way back on March 16, 1953, there was an “Inner-party directive drafted for the Central Committee of the Chinese Communist Party” on “Han Chauvinism” that said the following:

“Judging from the mass of information on hand, the Central Committee holds that wherever there are minority nationalities the general rule is that there are problems calling for solution, and in some cases very serious ones. On the surface all is quiet, but actually there are some very serious problems. What has come to light in various places in the last two or three years shows that Han chauvinism exists almost everywhere. It will be very dangerous if we fail now to give timely education and resolutely overcome Han chauvinism in the Party and among the people. The problem in the relations between nationalities which reveals itself in the Party and among the people in many places is the existence of Han chauvinism to a serious degree and not just a matter of its vestiges. In other words, bourgeois ideas dominate the minds of those comrades and people who have had no Marxist education and have not grasped the nationality policy of the Central Committee. Therefore, education must be assiduously carried out so that this problem can be solved step by step. Moreover, the newspapers should publish more articles based on specific facts to criticize Han chauvinism openly and educate the Party members and the people.”

It looks like that observation has not been followed up with implementation of a solution for even today, one of the factors that have exacerbated the situation in Tibet is the rise of Chinese nationalism. I hope the 18th Party Congress and the subsequent Chinese leadership will look at this issue seriously.

Han chauvinism, in other words, Racism, seemed to have been the big issue in 1953. It’s too bad that this report only highlights a small fraction of the officials that felt this way then.

I’ve been reading Ann Stoler’s book, “Carnal Knowledge and Imperial Power” and it has been making me think a lot about the role of the State in creating and/or encouraging cultural attitudes, such as racism, through the implementation of laws. Although Stoler’s archival ethnography focuses more on how these legislation affected the intimate lives of mixed children and their white/native parents with a focus on women at that time; for the purposes of this post, I want to center this discussion on the State.

Race, from the European lens, was historically situated in making sense of free slave labor justified by the moral civilizing missions in the colonies. Misunderstood notions of race became defined, reasoned, justified, and legislated through categorical explanations (Eugenics, rigid Caste system under the British,Hutu/Tutsi solidified under Belgian rule, and etc.) of non-European peoples under colonial/imperial control. Simply put, these racial categories allowed for domination and control, through inclusion and exclusionary legislative practices, of who had rights and who didn’t. These categorical differentiations also became, what Ann Stoler calls, the colonial “common-sense.”

Looking back at the above information in quotes and reflecting on all the policies that followed and continue now in Tibet and other “minority” areas, show how Racism was not only state sponsored (teaching both the Chinese and Tibetan population about the “Marxist” ideology and the need to update themselves of their lifestyles that reflect backwards “Traditions”) but encouraged “common sense” (state propaganda on resistance from the Tibetans or any other “minority” groups).

The reason I bring this up is to highlight the historical significance of how racist attitudes can and continue to be made into law that would allow for the normalization of racist thought. I place importance on how these attitudes (the idea that the Tibetans need their help, don’t know whats good for them, need to be taught the Marxist ideology) became normal/a given fact/common sense. The Chinese State not only made Racism possible through official legislation but encouraged the cultivation of present racist languages, attitudes, and feelings–in other words, racist Culture–among individuals who identify as Chinese (this includes “minorities” who have also internalized the racist “norm”).

This is why it seems completely normal for Chinese citizens for the State officials to issue notices restricting the movement of Tibetans and Uyghurs by enforcing they report themselves in Beijing. Or when it is ok for Hotels in China to refuse specific ethnic groups. Or the racist attacks on the Japanese allowed by the State by Chinese citizens right now. While the State restrict the movements of its “ethnic” groups, it allows for its citizen to carry on an inclusion and exclusionary practice that they understand as “normal” based on Race and Class.

This is how a thought, feeling, or opinion made into law becomes no longer a thought but gets constructed as a Fact or common sense. In other words, Han Chauvinism or Racism was and continues to be legislated by the Chinese State.