THE NEW GENERATION OF THE LAND OF SNOWS, WE WILL RACE WALK TOGETHER

For a long time now, I’ve been wanting to do a post about sports and Tibet. And now with Choeyang Kyi from Tibet winning an Olympic medal just days ago in the 20km race walk event, I finally have something to write about. I don’t know much about Choeyang Kyi’s story and rise, but what I do know is that against all odds of not even having a country to call her own, she made it to the Olympics and even medalled. Yeah, she had to compete under the Chinese flag, and in a uniform adorned in the colours representing the regime, but when she was competing and we were celebrating, I think I can safely say that we weren’t cheering for China, but for Choeyang Kyi, a Bhoepa. 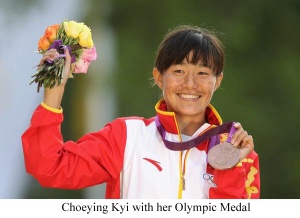 Sports and athletics is something I’ve always been interested in and was encouraged to take part in by my parents since I was young. I was about 4 or 5 when I first started ‘competing’ in sports – that’s when my parents signed me up for my first soccer team (I use the word ‘competing’ lightly here, have you ever seen a soccer game played by 4 year-olds? I mean it’s still soccer, but sprinkled with lots of giggles, hand-holding, skipping, cartwheels and just plain-old staring off into space). Since then, I’ve been able to compete in a range of sports from basketball to speed skating to rowing. 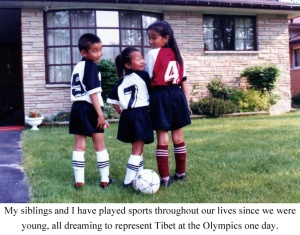 When I took part in Lhakar Academy last year, we were asked to envision what a free Tibet looked like. I think I was the only one who said that I would ensure that high quality sports facilities would be built and available to all Tibetan citizens, and felt kind of odd being the only one to do so. I realized then and there just how important athletics were in my life and how it had helped shape me into the person I am today. Through competitive sports, I’ve been able to learn self-discipline, learn strategic thinking, challenge myself mentally and physically, become independent, I’ve been able to meet all types of people, and travel all over and see new places, opening my mind to so many new experiences. But most of all, I think I’ve learned the value of hard work – it doesn’t matter how big, strong, or even wealthy someone is, everyone is on an equal playing field – the outcome depends on how hard you work and how much you want it.

Also, in some odd way, I really think playing sports helped instil in me the values of justice and equality, which help drive me in my work for Tibet. In our family, no sport was off-limits, and my parents never encouraged sports to my brother more than to the sisters in my family. Amala, as much as Pala, would be there playing basketball with us on the mini basketball court Pala made for us on our driveway – there was no notion that one sex or type of person was stronger than the other. I always felt I deserved to play or participate in whatever activity as much as any other person, regardless of sex, race, or financial class.

On the Tibetan diaspora side, I definitely think sports has played a large role in strengthening the Tibetan community. There are always soccer and basketball tournaments taking place in India, the United States and Canada, bringing together young Tibetans from all over, not only to build on their athletic skills, but also building friendships and unity that can only help the Tibetan movement. And who knows, maybe these types of tournaments will help produce the next Tibetan Olympian. The only thing I will say is that I wish more of these competitions were open to and/or encouraged female participation. If the Olympics were able to open up every sport to both males and females for the first time this year, then why not us?

I’ve even been able to use sports as an Tibet-awareness tool. Here in Ottawa, a group of us Tibetans (plus some non-Tibetan friends since there aren’t enough Tibetans here to make a full soccer team) started a team up this summer called Tsampa FC and play every week in a co-ed rec league in our city. We get questions from our team mates and competitors asking us what the team name means or what the logo on our shirts are (a Tibetan snow lion), giving us the opportunity to talk Tibet.

As I said in the beginning, I’ve been wanting to write a post about Tibet and sports for a while now. The thing that’s been stopping me was the lack of information available about sports and Tibet pre and post 1959. Perhaps I’ll have to dig deeper so I can write a more Tibet-and-sports-comprehensive post, but at least for now, I can say with certainty that a Tibetan is one of the top race walkers in the world.

ps. To my friend Urgen who always told me that I walk down the street freakishly fast and that I need to slow down, I say to you: it’s in my blood!

pss. A HUGE congratulations to Choeyang Kyi. You’ve made all Tibetans all around the world extremely proud. At a time like this in Tibet when there is so much anguish and sadness, your accomplishment really did provide us with a break of joy and incredible pride. THANK YOU.

« Approach Me Not – Palmo
“My Family’s Friendship with the Obamas” »