When the snowlion descends from the mountain

A while ago, we received an invitation to a smoke-offering ceremony (Sangsol) to commemorate the freedom fighters of the Tibetan resistance and all compatriots killed in the course of the Chinese takeover.

Andrug Gonpo Tashi’s memoirs, Nyarong Aten’s life-story written by Jamyang Norbu; or John Avedon’s “In Exile from the Land of Snow”; those were books that coined us as youths. Who wasn’t impressed by the stories of the brave men of the “Four Rivers and Six Ranges” or Chushi Gangdrug, who fought the invaders and orchestrated the Dalai Lama’s flight? 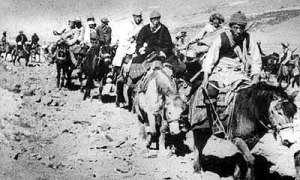 Decades later, somebody gave us a copy of Lithang Athar Norbu’s oral memoirs recorded on DVD. He recounts, in great detail, those days of glory and subsequent tragedy from the perspective of a directly involved witness to history. Irritations between his organization and the Tibetan government, which later arose when on Indian/Nepali soil, were also freely addressed. He spoke from memory about historic events as if everything had just happened yesterday. I was glued to the TV for hours. I would not have been able to tell. He appeared very together and lucid, but somebody pointed out he was already very ill. Parts of the DVD are also available as video on Youtube